Joy News investigations into underhand dealings at the Births and Deaths Registry have uncovered how a total of ¢411,760 meant for the state, were diverted into private accounts in the Upper West, Western and Eastern Regions.
These included funds meant for registration of child births in deprived communities as well as revenue collected by staff of the Registry between 2015 and 2016.
The latest Joy News documentary titled ‘Paper Citizens’ was aired on the Joy News channel on Multi TV Monday night.
It detailed how officials of the Births and Deaths Registry have over the years, been issuing birth certificates to foreigners to help them acquire Ghanaian passports. 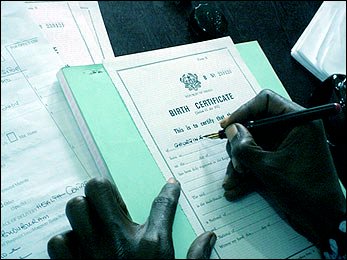 Ivoirians, Cameroonians and Nigerians, who are the main beneficiaries of the criminal dealings, pay as little as ¢150, to acquire the certified documents, undercover journalist, Kwetey Nartey revealed.
Read also: Official collusion: Nigerians, Ivorian, others get Ghana birth certs cheaply
But charging unapproved fees is not the only malfeasance workers of the Births and Deaths Registry have been involved in, as the team uncovered, funds had also been diverted into private accounts by individuals.

He also did not issue official receipt for the fees and rather lodged the amount into a private welfare account held at the National Investment Bank, Wa.
Again, the Auditor-General found bank transfers of over ¢175,000 by the Sekondi Births and Deaths Registry in the Western Region, into an HFC bank account.

A review of revenue records and bank statements disclosed that total revenue of ¢175,860.00 collected by the Registry between March 16, 2016, and September 1, 2016, was paid to HFC Bank Limited, Takoradi.

The report further noted that there were no records to support the disbursement of the funds which was meant for the registration of 10,000 children in deprived districts in the region, including; Wa municipal, Wa West, Wa East and Sissala East districts.
“The Regional Registrar also failed to respond to audit observations drawing his attention to the anomaly after several reminders,” bemoaned the Auditor General, adding, “As a result, we were unable to determine whether the funds were used for the purposes for which they were released by the NGO [Plan Ghana].”
The report recommended that the registrar should “immediately” account for the amount, failing which he should refund it to the account of the department/registry.
He should also desist from paying public funds into private account, added the report.
In another development, an audit of the registry’s payroll uncovered that seven officers who embarked on compulsory retirement still had their names on the payroll, resulting in the payment of “unearned salaries totaling GHS144,537.64 into their bank accounts.”

Below is the breakdown of the unearned salaries paid the eight

Name of Officer Staff ID No. Effective date No. of months Salary (GHS)

The said misappropriation of the registry’s funds occurred because its management failed to draw the attention of the Controller and Accountant General’s Department (CAGD), the auditor’s report disclosed.
“Their bankers were not also requested to stop crediting their accounts with the salaries,” it added.
The report thus recommended the retrieval of the amount from the retired officers, failing which the registrar and the registry’s accountant should be held liable.

By: Joy News And Starrfm