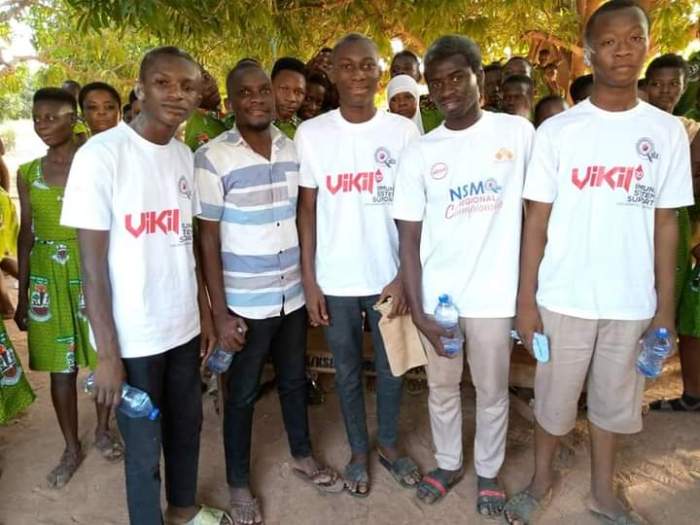 The team which sailed through to the one-eigth(1/8) stage of the competition was eliminated together with St. Augustine’s College in the their quarter-finals stage by Chemu SHS.

That notwithstanding, on November 20, 2021, Kansec Old Students Association(KOSA), students of Kansec, teaching and non-teaching Staff of the school among other groups, in full glare of euphoria took to the principal streets of Tumu town in massive numbers, amid drumming and dancing, to welcome the contestants back to school.

In his brief remarks on the team’s journey, Mr. Munkailu Abubakar expressed his gratitude to the school and the KOSA for immensely supporting them financially, morally and in prayers during their stay in Kumasi for the competition.
He also said the school has been adjudged the Best Deprived Senior High School in the competition this year, and that the school, per their performance has qualified for 2022 NSMQ competition.
Mr. Munkailu has called for continuous support for the the school to go for gold in subsequent contests.

Meanwhile, speaking on behalf of KOSA, Mr. Rauf Zini while expressing his excitement has assured the school and subsequent NSMQ teams of the association’s support. But he has charged them to continue to put up their best in subsequent years to go farther than they have this year.

A representative of Radford FM who was a senior prefect of the school, Mr. Wasor Ibrahim has also expressed the station’s commitment to support the school with free airtime for advertisements and talk shows on the team’s next endeavors.

The headteacher of the school, Mr. Luriwie Kanton also an old student who couldn’t hold his joy led the jama group to sing a song to spice up the euphoria.
He has also expressed his gratitude to the Member of Parliament for the Sissala East constituency, Hon. Issahaku Amidu Chinnia for supporting the team financially to go into the competition. He has also extended his gratitude to Radford FM, KOSA, the general public and both teaching and non-teaching Staff of the school for their diverse contributions to this feat.
Mr. Mohammed L. Kanton has assured to commit resources to the team for the next competition.
He seized the opportunity to disclose to KOSA and the general public about the school’s upcoming Golden Jubilee celebration next year, and has entreated the association to take up the event as one of their responsibilities to make it a success.