The Deputy Regional Minister for Upper West Alongside Regional Chairman of the Governing New Patriotic Party Have traveled to Accra to Pay Their Last Respect to The Late Captain Maxwell Mahama who was Lynched at Denkyira-Obuasi where he was going jogging. A Group of Young Men Accused him of being an Armed Rubber and lynched him. 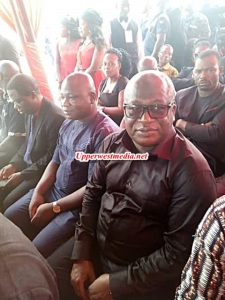 His Final Funeral Rite was held on Friday 9th June 2017

The other burial and funeral rites as listed in the statement are as follows:

Maxwell Mahama was gruesomely lynched and partly burnt by some youth of Denkyria-Obuasi in the Central Region, who claimed they thought he was an armed robber. He had gone to that part of the country on an anti-galamsey mission with other soldiers.

About 40 persons have so far been arrested in connection with the murder to face trial.

Monument to be erected in honour of Major Mahama

Meanwhile, President Akufo-Addo has announced plans to erect a monument in honour of Major Mahama, after he posthumously promoted him from the rank of Captain.

The President made this announcement when he visited the family of the deceased. He also announced  the setting up of a Ghc500,000 Trust Fund to cater for the education of the late military officer’s children.