The NDC Unity Walk is aimed at closing the ranks of the umbrella family and building bridges that were broken in the party before and during the 2016 electioneering.

On Friday, April 6, 2018, hundreds of NDC sympathizers in the Upper West region welcomed former president John Mahama to the region ahead of today’s gathering. 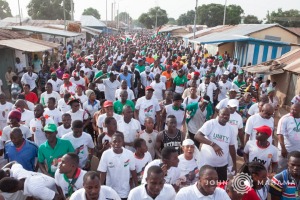 The NDC Unity Walk has been organised in 6 other regions in Ghana.
John Mahama has not declared his intention about leading the NDC in the 2020 general elections but insiders believe the walk and other moves being made by the former President are indications of a desire to hold on to the party’s leadership.

So far majority of his former appointees, some national executives and all the ten Regional Chairmen have openly endorsed him to lead the party.
The NDC party will have its Presidential Primaries in November this year, 2018 to elect its Presidential Candidate for the 2020 general elections.