On one fateful Saturday morning in Wa, the Upper West Regional Capital, this writer was on his retinue jogging exercise on the Wa-Kumasi road.
His aim is to reduce some kilogrammes and burn out some calories in the system to keep him fit and healthy. 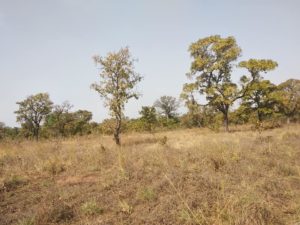 However, on several occasions, he came across many articulator vehicles and various trucks hauling charcoal to the southern part of the country.
Sometimes, he could count about 20 vehicles moving with the product to their destinations. In some of the occasions, this writer shook his head to stop the avalanche of thoughts from coming.
But tried as he did, he failed because the environment which is critical to the survival of the people is under serious threat of depletion. In deed all that the region has is the environment which serves as the soul and spirit of the people and needed absolute protection.
At night, the environment echoes with emptiness; all the rosewood, mahogany and other tree spices, in the entire region are gone through illegal lumbering. The activities of illegal timber merchants have added to the overwhelming destruction bushfire caused to the environment on yearly basis.
Shea trees under siege
And in recent times, the shea tree which serves as one of the most valuable economic trees of the people is besieged. Charcoal producers, “Pito” local drink brewers and “Waakye” (rice and beans sellers) have turned their energies towards the wanton destruction of the shea tree, despite its economic values and usefulness to the people.
In local literature, one can confidently say “the shea tree is the north and the north is the shea tree”. The shea tree provides oil for the lighting at home, its products are used for the production of cosmetics, medicines and several others, while its fruits are edible and very helpful to the body.

But going round “pito” brewing centres in Wa, the shea tree branches are heaped in large quantities and used as firewood for the brewing of pito. The same is with Waakye sellers. The youth, especially women are burning the shea trees in large scale for charcoal production, even though it is one of the cash crops in the north that benefits women most.
Impact of desertification; Upper West in perspective
The Upper West Region has now become a leading producer of charcoal in Ghana, despite its desertification nature. Charcoal production has become a commercial activity of the youth in the communities and if some measures are not put in place to address the menace, sooner than later, the region would become a desert.

Desertification, which often results from felling too many trees and damage that occurs from such activities such as; cattle grazing and bushfire, are affecting the well-being and livelihoods of several people in the communities.

Precious fresh water supplies are also drying up, such as aquifers under major towns and villages have been reduced to a trickle for much of the year.
Dwindling water supplies have caused escalating tensions and even conflicts to erupt as many people, including disadvantaged farmers, don’t have enough water and are struggling for their share.
There are tens of thousands of rivers and lakes dying all over the region. People are leaving their villages, their hometowns because they don’t have any more water to drink and in search for fertile lands to farm. Decline of wildlife due to species extinction is so rapid that there is no modern comparison.

The region in recent times has been experiencing worsened droughts that make it difficult to plant crops, thus adding to food shortages and prices rising. Increased temperatures mean erratic rainfall – either too little or too much at a time – bringing ravaging floods that drown the crops and fires that burn the forest.

Disasters will never end if the current trend is allowed to fester on. By so doing, the restoration of health, biodiversity will be allowed to thrive, planet equilibrium restored, along with the easing of conscience and capacity for elevated consciousness.

The physical evidence up to date shows that there is no time. The threats imposed by global warming are more than imminent; they are already here, as we can see through many disasters, upheavals, climate refugees, phenomena around the region.
Some communities have to cope with worsened drought situations.

We need to tackle the root problem now by stopping the greatest contributors to our environmental crisis.

We must focus on stopping the destruction of the environment and waste of the forest and lands, stop talking around the subject, but talk to the point: charcoal burning in commercial quantities and felling of rosewood and other tree species and the perennial bush fires must all stop now.
Without this main, most time-effective change, it won’t be enough to repel the worst consequences that have accumulated.

Moreover, the problems such as the warming atmosphere, water shortage, food scarcity, and desertification, we can quickly eliminate by stopping the destruction on the environment.

“You see, if we sow an apple seed, we will get an apple tree and from that apple tree, after a while it will bear apple fruits for us”. This a circle of life. If we kill, we cannot expect life from it. Every action bears the same seed fruits afterwards. It is not religious speaking; it is scientific

“So, in order to solve the problem we have to reverse our actions. And instead of deforestation, we have to plant trees again. Take care of whatever environment that we have. And instead of polluting our planet, the air, we have to turn to friendly energy and sustainable energy. Just reverse our actions.
We should be in coordination with the universal energy, the loving law of nature. If humanity does not respect other forms of life, then the life of humans will also be in peril, because we are all interconnected.

Recommendations
Trees attract rain, keep the soil, and stop the erosion. And they give oxygen and shade, and give a home to the environmental forest friends, animals, which in turn, also keep our planet going in a good, ecological way.

Deforestation is not just about the permanent changes to the world‘s temperature, rainfall and weather patterns, which the forests regulate, it is not just about the millions of people who might lose their livelihoods that depend on the forest. There is more to it than that. There is the extinction of plant and animal species that is 100 times faster than what is natural, and it ruins our ecosystems.

Everything on this planet, including us, is integrated, and we help each other to make our lives here comfortable and liveable. But if we don’t know that, we are killing ourselves. Every time we fell a tree, we are killing a little part of ourselves.

The leaders of the region must do something. Just because we can still sit here pretty and talk, just because in our area, there is not yet water shortage or food prices going up does not mean it will not happen soon.

The government has to explain to people that it is truly harmful now and this is an emergency that people should stop destroying the environment. It is not a matter of personal choice anymore. It is a planetary life- and death matter.

We only have this one home; earth. If it is destroyed, another one cannot be built, unlike a house which can be rebuilt, we cannot build another earth if it is destroyed. Therefore, the most important thing for the government to do is to spread information to the public. We have no other choice – either we change or we will all go.

Avoid self-destructive habits now or else, major negative consequences awaits us soon. Let us try harmless ways to calm our poverty anxieties. Balance our time. Many find it helpful to alternate periods of poverty with temporary breaks activities that temporarily distance them from their poverty.
The government is aware. It is just perhaps the government is putting priority elsewhere.

Government must launch a crusade to deal with the wanton destruction of the environment for commercial charcoal production in the region as it did with the illegal mining menace in the country. Wake up, wake up now and save yourselves. The hour is late; it’s time to decide. The Environment crisis in the region- Let we stop it now.
By Bajin D. Pobia