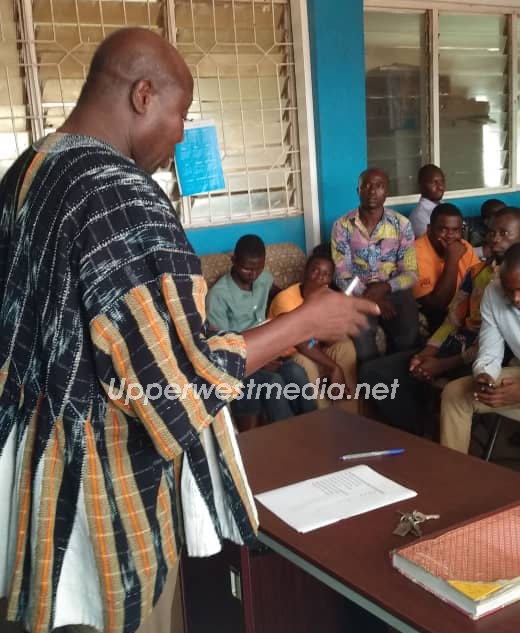 A  group of Double Track teachers have expressed appreciation to Ghana’s Education Service Regional Unit within Upper West for being responsive to their plea and call for processing of their staff IDs.

According to them they were marvelled when they saw over 900% increase in the Number of IDs generated.

They added that they have by this built confidence and trust in Ghana Education Service.

Some of these teachers used the opportunity to suggest that they won’t always complain when it’s Wrong but appreciate things when they are Right.
They mentioned Names like Mr. Evans Kpebah, Mr. Baba Gado, Mr. Rigobert, Madam Mary Assunta, Mr. Fatawu as Friendly and Supportive during their time of Demands and added that they hope the Upper West GES hits higher Numbers like other Regions in their next Generations.

Upper West GES earlier in May Released 11 staff IDs out of 320 recruited double track staff for the Region after initially releasing 35, this made aggrieved staff who storm the regional education office demanding reasons for the delay in processing their IDs.
A month after GES addressed the teachers, 53 IDs were released in July, an increase by 959%.

We have acknowledged your handwork and commitment to serve and we deeply appreciate this act.
Improving in the Number has called for extra efforts, duty and sleepless nights from you.
We have observed that after meeting with us and assuring us of improvement we’ve seen it in your next release(from 11 to 53).

We are highly Impressed and would devote more time to our work in order to serve GES better.
We were initially demoralized and confused as our colleagues in other regions were far ahead in preparation.

We by this wish to thank Mr. Evans Kpebah, Mr. Baba Gado, Madam Mary Assunta, Mr. Rigobert, Mr. Fatawu, Mr. Duncan Nsoh and others within the Unit for being gentil towards us and ensuring we were attended to.

We by this call for more efforts to process the IDs of our brothers who have sacrificed the little they saved from other jobs they’ve left to be where they have no relatives to support them, most of them left other regions to be here, others have been assigned herculean tasks without knowing their faith due to lack of staff IDs.
We by this call for processing of all Staff to ensure we are motivated to work without question marks.