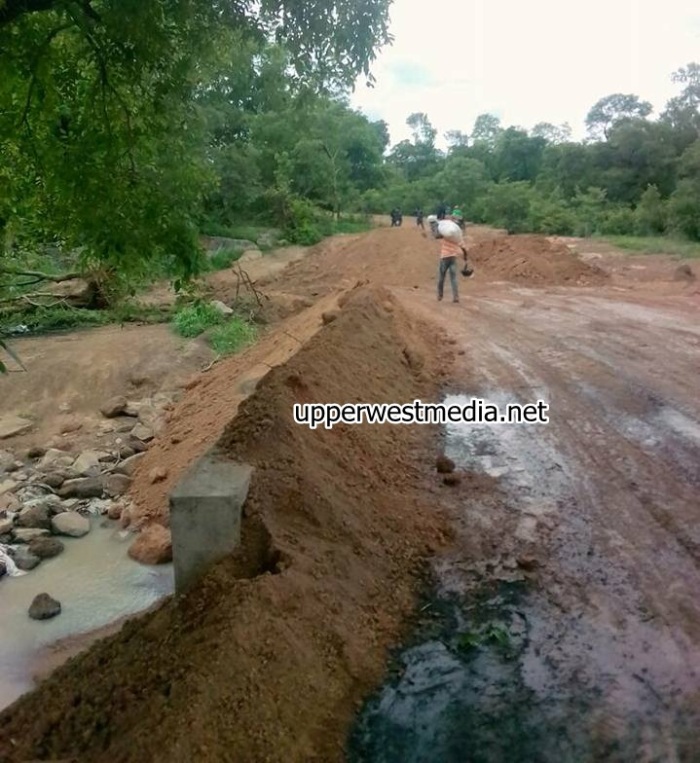 Hundreds of people from Jeffissi and several satellite communities have been cut-off from Gwollu for social and economic activities after a bridge linking to the town of Former President Dr Hilla Liman broke down.

The bridge had being in bad shape, according to local residents, and posed danger to motorists and pedestrians especially farmers and market women but little attention was given to it by local authorities.

Many commuters from larger communities such as; Bullu and Nyemeti have complained that people could not cross over to their farms any longer whilst families were locked up and unable to go back to their homes in Gwollu.

The box culvert bridge which connects Jeffissi to the Sissala West District capital got damaged about five years ago, but left unattended to until 2016 when some work started but was also later abandoned.

A new contractor, assigned to fix the bridge this year removed the entire concrete box but got caught up by the rains, Jeffisi Assembly Member Mr Ali Fuowie Yahaya, told the GNA.

The current situation facilitated by floods created a big gutter and washed away both the diversion and made the area almost impassable for motorists and pedestrians.

Mr Yahya said as a result of the downpour lasting several days and hours road users used tricycles trying to cross the road with their hands holding up their goods in the sky.

He was worried that he might lose his position as the Assembly member as a result of the bad nature of the bridge and the road, adding, “It will be very difficult for me to represent my area during assembly meetings”.

Mr Yahaya said, “Farmers across the bridge would not be able to visit their farms as a result of the inability of the contractor to finish up with the work”.

“The community members were tired of listening to speeches from leaders and therefore planning to use other available means that would help in addressing the issue that was neglected for many years,” he added.

He expressed the worry that tax collectors might not be able to convince the people in those areas to collect taxes since authorities failed to work on the bridge.

“The community members are preparing to write a petition to leadership of the District concerning what worries them and what they will be doing to make their many challenges solved, most especially the bridge,” he said.

The Sissala West District Chief Executive, Mr Mohammed Bakor Zakaria, told the GNA that, “the bridge has been awarded on contract, the Assembly on its part has done what it is supposed to do to ensure that, the work is awarded and the contractor is at the site to work on the bridge”.

According to him, he had discussions with the Upper West Regional Feeder Roads Director to help facilitate the process to bring the contractor on site and get the bridge fixed.

But the contractor, Mr Alhassan Kantong (business name, ALASKA) said, “Due to the heavy rainfall” he has decided to put the contract on hold but would resume work within the shortest period when the rainfall subsides.

He appealed to the affected communities to bear with the situation since he was only given the project sometime this year.