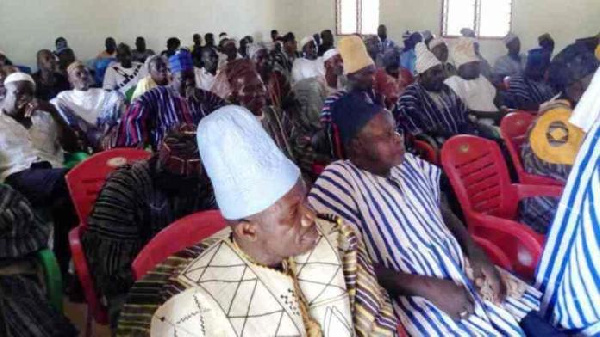 Chiefs and Elders of Wa West

He was speaking at a
community Durbar on mental health at Wenchiau in the Wa West District organised
by the Human Rights Advocacy Centre in collaboration with Mind Freedom Ghana.
The programme was on
the theme: “Protecting the Wellbeing and Rights of Persons with Mental
Disabilities”.
Mr Veng said
statistically the District recorded 608 cases of mental conditions in 2016, 734
in 2017, 1,840 cases in 2018 and 459 cases in the second quarter of 2019.
He said even though
epilepsy/seizure was the leading cause of all mental health conditions recorded
from 2016 to 2018 there were other factors such as schizophrenia, delusional
disorders, depression, neurotic and mental disorders due to alcohol use,
behavioral disorders, pregnancy related disorders, mental disorders due to
psychoactive use and other mental disorders not specified.
Mr Veng said the
District Health Directorate with support from the District Assembly and other
stake holders had carried out mental health activities, which included
registration of people with mental illness on the NHIS, donation of animals,
sewing and hairdressing machines for stable patients to learn trade and
provision of psychiatric drugs for mental patients.
Mr Nii Lartey
Addicoy, the Co-director of the Mind Freedom Ghana and the Human Rights
Advocacy Centre, said people with mental disorders were often excluded and kept
away from decision making even when issues being discussed directly affected
them.
According to Mr
Addicoy the fundamental human right of people with mental disabilities was
often violated and abused as well as denying them the opportunity to reach
their own potential.
He said it was
because of this that Mind Freedom Ghana and Human Rights Advocacy Centre sought
funding from Star Ghana Foundation to organize the durbar to educate people on
how to take care of people with mental disorder in their communities and families.

The programme was attended by the paramount chiefs of Dolimo and Wechiau traditional areas, some
selected heads and students of junior and senior high schools within the District, heads of departments, youth groups, trade unions and other identifiable
groups within the Wa West District.