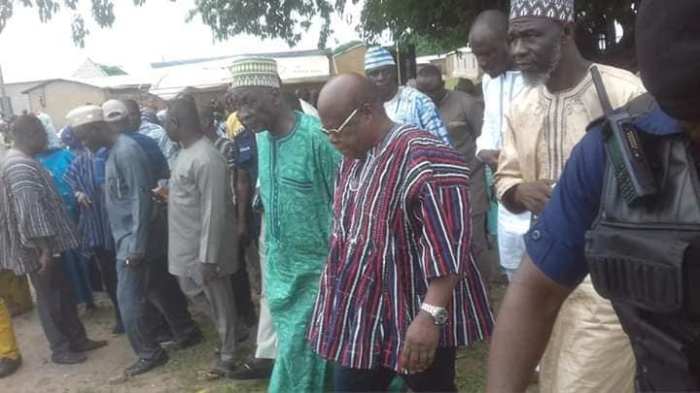 Twelve persons have filed their names to contest for the primaries in 5 constituencies held by the New Patriotic Party (NPP) in the Upper West region.

Apart from the Nandom constituency where Interior Minister, Ambrose Dery is the lone ranger, the 4 other constituencies will be hotly contested for.
According to the Nandom constituency treasurer of the NPP, Alhaji Abdul Rahman Hamidu, they are satisfied with the performance of the Interior Minister.
”He has worked and improved the lives of the people in all spheres of development.
“From employment, provision of potable water, electricity, roads, income-generating activities, and women empowerment, he has no peer or equal and we are ready to give him four more years together with President Akuffo-Addo to do more.
“How can we at this stage sell our dog that is good in hunting for a goat that will only be bleating at home,” he added
But this luxury does not extend to his colleagues in the interior committee and Member of Parliament for Sissala East constituency, Ridwan Abass Dauda.
Between him and a second term at Parliament, is his old foe and Deputy Upper West Regional Minister, Amidu Chinnia Issahaku who has never forgiven him for his defeat four years ago.

The incumbent MP told his supporters after filing his nomination papers that, “I am the only candidate in NPP that can win power for the NPP family, we fielded candidates from 1992,1996,2000,2008, 2012 and none could win the seat for us, but you fielded me in just 2016 and I won the seat for the party
“We NPP don’t want people to lead the party but we need people that can win the seat again, I am the only striker who scored a goal for NPP within 5 minutes of play, so come 25 April 2020, give your vote to Hon. Ridwan Abass Dauda.”
Deputy Upper West Regional Minister, Amidu Chinnia Issahaku said if given the nod he will initiate a constituency stakeholders forum where every year he will meet with stakeholders in the constituency to discuss issues of development.
In the Lawra constituency, Deputy Minister of Roads and Highways, Anthony Abayifaa Karbo will lock horns with Billson Dontaa.
The odds, however, seem to be against Billson Dontaa considering some developmental projects attributed to Anthony Karbo after he won the seat not only from Bede Ziedeng but from the NDC that had held it since 1993.
Campaign coordinator for Karbo 2020, Amos Gyetuo who spoke to JoyNews said the team is confident of a victory.
”The people have shown that they are committed to his leadership that is given them the needed development and Anthony Karbo is delivering on that”, he stated.

The Wa East constituency has four persons filing their names for a primary which has incumbent Godfrey Bayong Tangu as the front runner. The other aspirants are, Yakubu Salifu, Adams S. Yakubu and Baduong S. Bashirudeen.