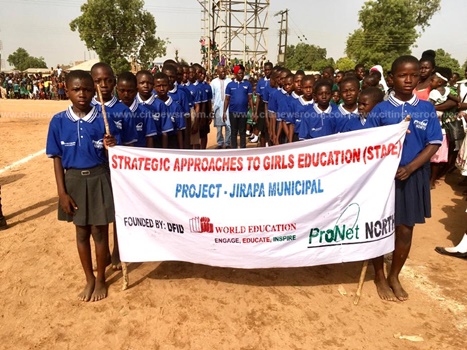 Vulnerable out-of-school girls in the Jirapah municipality of the Upper West Region who are currently receiving formal education under the “Stage Project” were on Friday recognized for their sterling performance at the 63rd Independence Day celebration.

The girls who made their maiden appearance in the annual event beat their counterparts in the formal basic schools in the municipality to emerge 3rd in the primary category of the parade.

They were presented with a certificate and hand washing equipment to promote good hygiene among them.

She said, “As we celebrate this day in our history, I will like to commend all our partners especially ProNet North Ghana for their tremendous work in ensuring that girls who were left out of the formal school system get the opportunity to be educated.”

The Stage Project is an initiative of World Education Inc. Ghana aimed at ensuring that girls between the ages of 10 and 19 who for some reasons, could not access formal education due to their vulnerabilities in society get access to formal education.

The Project which is implemented by ProNet North Ghana with support from PWC and funded by the UKAID has since its inception last year enrolled over 2000 vulnerable out-of-school girls mostly in deprived communities of the Upper West region.

Joseph Napeng, a coordinator of the Stage Project was full of praise to the Jirapah municipal assembly for allowing the girls to participate in the march parade.

According to him, “it is a great way of integrating the girls in the formal education system and also promote a sense of belonging to vulnerable out-of-school girls who are expected to be fully integrated into the formal school system after their first stage of learning.”

Some of the girls in an interview with Citi News expressed joy for the opportunity to be included in march pass.