The only forest reserve in the Wa Municipality of the Upper West Region has been turned into a refuse dumb by some recalcitrant residents. This has made the forest unattractive for visit.
Refuse including industrial as well as domestic are scattered within the length and breathe of the forest. 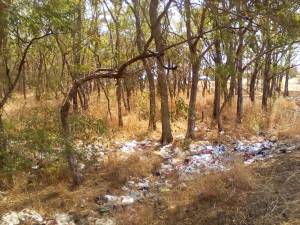 Speaking to the Regional Forestry Commissioner of the Upper West Region, Mr. Isaac Adonteng, he expressed worried over the issue noting that his outfit is advancing plans to bring to book the perpetrators. ” You See the few people you may arrest probably are the old ladies who may even come cutting firewood or dumpling the few waste she has gathered from the house and you look at her and only warn her not to repeat same but a different person may come so that is why the forest is becoming filty”.
The Commissioner also cautioned residents not to hid under the ambit of the forest to practice open defecation as many people do go into the forest to defecate.
” We don’t dump only industrial waste we also dump human waste, many people go into the forest to free themselves, they leave whatever is in the inside the bush, as the wind blow, it blows over this fecal deposit, it goes back into the atmosphere and a lot of us are breathing it, in case somebody is sick and has contengious disease that is airborne what happen, we stand the risk” He noted.
He said his outfit is doing public sensitization on the bad effects of bush burning and open defecation but will crack the whip on the few recalcitrant ones who may not pay heed to their plea.
Meanwhile, virtually every part of the forest have been set ablazed by unknown persons.