A water Closet toilet facility for Nadowli community in the Nadowli–Kaleo District of the Upper West Region has been locked up and left to deteriorate without use after it was fully completed several years ago.
Parts of the toilet facility located in the Nadowli East community has been gutted by fire, while the remaining restrooms are unused because it has not been commissioned.
The situation is said to have forced members of the community to resort to opened defecation and a dilapidated toilet structure built many decades ago.
Environmental health officials consider the old dirty toilet facility as a health hazard that exposed people to outbreak of diseases like cholera, diarrhoea, typhoid and dysentery.
Ghana News Agency visits to the new facility showed a poly-tank connected to a mechanised borehole to pump water for use, but attempts by community leaders to get the new toilet facility commissioned and opened for public use proved futile as residents now relapse to practising open defecation. 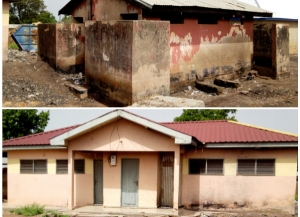 Mr Braimah Yakubu, the Assembly Member for Nadowli East Electoral Area, expressed the frustrations he went through in several attempts he made to ensure that the toilet facility was commissioned.

He said: “Sanitation in Nadowli district is very poor comparing to the sanitary facilities that we have as a capital city and people are practising open defecation, and as a district capital, we are supposed to be role models but it’s rather the opposite.

“The one that I am standing by is a water closet toilet facility built by the MP [Member of Parliament – Alban S.K. Bagbin] for almost seven years ago, and we thought it was an opportunity for us to curb some of these things.
“But since it was built, it has become a white elephant. We are not using it and the community cried several times and I took the initiative and went to the Assembly yet it’s not yielding results.
“Few of them are still using the old toilet facility built before some of us were born and others are also practising Open defecation. Some time ago there was a fire outbreak in the WC and without the intervention of the Fire Service the place would have burnt into ashes.”
“When I visited the Assembly about the issue, I was told their hands are full because it’s the MP initiative, I myself called and texted the MP but still.”
The Facility was constructed by the MP to help improve sanitation situation of the area and boost environmental conditions of the District capital.
Speaking on the issue, An Environmental Health Expert, who is also the National Public Relations Officer of Ghana Environmental Health Association, Mr Salifu B. Andrews, said it was appalling for a Water Closet facility built for some years ago to be left unused because it was not commissioned.
“We cannot fight any open defecation, if we don’t have toilet facility in the community. So, I appeal to stakeholders to commission the newly built water closet structure to enable residents use it,” he said.
A research conducted on the Menace of open defecation and diseases in the Nadowli-Kaleo District in 2016 established that 50 percent of the people attributed open defecation to inadequate toilet facilities within various houses and in the community.
It also showed that 25 per cent of the people indicated filth at toilet facilities, especially the public toilet, motivate them to defecate openly while 18 per cent disclosed that attitudes and distance were the reasons for which they defecate in the bush or field.
–
By: Ibrahim Wangara