President of the Republic, Nana Akufo Addo has proposed that the new pending autonomous university in Wa, University of Business and Integrated Development Studies (UBIDS), should be named after one of three founding fathers of the New Patriotic Party (NPP), a party that prides itself as the Danquah-Dombo-Busia tradition, to honour him for his contribution to Ghana’s democratic evolution and development. 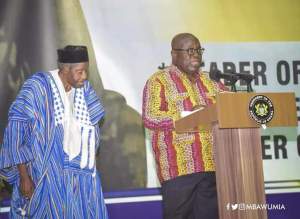 Speaking at the 20th anniversary and official unveiling of the legacy of Chief Simon D. Dombo and the launching of the S. D. Dombo Foundation for Development and Leadership Studies, President Akufo Addo, said, “No monument in his memory, no matter how imposing, can compensate for the sacrifices he made to ensure that we are where we are today”. “I think it is appropriate in the circumstances that the new impending autonomous university in Wa, University of Business and Integrated Development Studies, be named after this man who played such a prominent role in mobilizing the masses in the Northern sector of our country to join the fight for national freedom and independence, a man who’s life became synonymous with sacrifice and selflessness,” the President said.

*THE MAN S. D. DOMBO* Simon Diedong Dombo was a politician, teacher and chief in the then Northern Territories of the Gold Coast, known today as the Upper West Region. As Douri-Na, he was reputed to be the first educated chieftain in the whole region. He was also one of the founders of the Northern People’s Party, which later merged with the United Party and came under the banner of the Progress Party.

This ensured that basic health care was available at the point of need even in the hinterlands. The clinics were accompanied by low-cost bungalows to house the health personnel. This was in line with the PP government’s Rural Development Programme. Chief Dombo retired from active politics after his release from custody following the coup d’état of 13 January, 1972, led by the then Colonel Ignatius Kutu Acheampong, which overthrew the PP government. Chief Dombo became an elder statesman and a mentor to the younger generation, among whom were John Agyekum Kufuor and the late Alhaji Roland Issifu Alhassan. He helped form the successor parties to the Progress Party, namely the Popular Front Party (PFP) from 1979-81 and today’s New Patriotic Party (NPP).