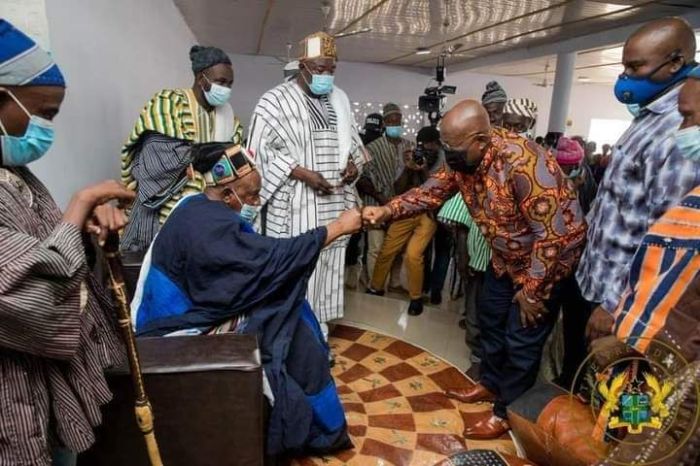 The President of the Republic, Nana Addo Dankwa Akufo-Addo, has apologised to the Overlord of the Waala Traditional Area, Naa Fuseini Seidu Pelpuo IV, and to the people of Wa for the brutalities meted out to some residents by some soldiers earlier this month.

Addressing Naa Fuseini Seidu Pelpuo IV on Tuesday, 13th July 2021, at the beginning of his 2-day working visit to the Upper West Region, President Akufo-Addo indicated that the unfortunate incident was one of the reasons for his visit to the Region.

According to the President, even though the Minister for Defence, the Minister for the Interior, as well as the hierarchy of the military have come to apologise to residents of Wa, and have taken measures to deal with the soldiers who perpetrated the act, he also deemed it necessary to come to Wa personally and render an apology.

One of the fair reasons why I came, is because of the incident that occurred here in Wa between the garrison, some soldiers here and the people of Wa. The military leaders have been here and they have promised you that they will deal with those who were responsible.

“I have come to add my voice to that of the soldiers, as well as the Minister for Defence, to say how sorry I am about the incident, and to let you know that we will do everything possible to make sure that such an incident is not repeated,” he said.

With the Minister for Defence, Hon. Dominic Nitiwul, indicating that Government will be responsible for the medical bills of those who were injured, President Akufo-Addo thanked the Wa-Naa for recognising that “the promises that have been made have been kept and that now we should put that issue behind us and move forward.”

The President continued, “And I want to congratulate you on the very statesman-like pronouncements that you made on that occasion. You sure look like the senior traditional leader that you are.”

With the threat of terrorism real along the Ghana-Burkina Faso border, he noted that it is only the co-operation of the people of Wa and the security forces that will make it possible for Ghana to prevent terrorists from carrying out an attack in the country.

“So, I want to add my voice to yours in calling upon the people to continue to work closely with the security forces to make sure that we can keep the terrorist menace out of our country. And that means that we should not dwell too much on this incident that occurred. As human beings, mistakes occur. The important thing is how you correct them, and move forward,” the President said.

Thanking Naa Fuseini Seidu Pelpuo IV, once again, for the leadership he has displayed in the course of the unfortunate saga, President Akufo-Addo noted that “It is one of the lucky aspects of my period as President, that all through Ghana, especially in the northern parts of this country, I have very wise traditional rulers who are helping me in the governance of this country. Fortunately for me, you are one of them.”