Police in Lambussie District in the Upper west Region have arrested criminals suspected to be hiding in Ghana away from Burkina Faso.

These armed men actually robbed a bank in Burkina “Bruo” killing 3 staff, made their way into Tumu and proceeded to suke, they eventually positioned at a point in suke as yesterday was suke market in attempt to rob. The Burkina spiritual task force traced their movement history and had them. Coincidentally, the Lambussie police were equally carrying their usual operations, met the scene and quickly picked dem to the lambussie police station. 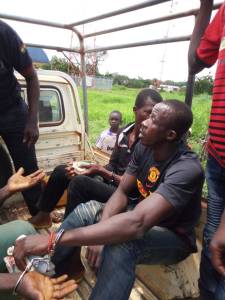 They were 6 armed men, 2 escaped and the 4 were arrested , currently they are in Wa.
The Burkina spiritual task force exhibited displeasure because they wanted them dead. The Burkina task force and some lambussie youth invaded the Lambussie police station yesterday with their implements proposing to kill them but Ghana laws did not permit them with the chance. Some police officers in the process of calming situations received physical buttress from the youth as to why they were preventing them from executing their ploy to assassinate the robbers.