Scores of aggrieved youth of Janguasi in the Nadowli-Kaleo District of the Upper West Region have threatened to cut ties with politicians if the farming community is not connected to the national grid before year 2019 expires. 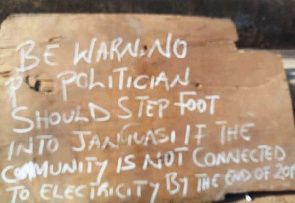 Residents told the Ghana News Agency that the community was supposed to be connected to the national grid in 2015 when the government undertook electricity extension to most villages in the District under the China Water Project (CWP).
However, the community did not benefit from the project, thereby plunging the entire area in perpetual darkness till date, which was seriously undermining social and economic activities.
“To our surprise, those who were working on the electricity extension explained that Janguasi was not captured on the list of villages which was to benefit from the facility,” Karim Salia said.
Members of the youth group who looked upset and despondent have mounted a giant bill board at the community’s entrance which reads: “Be warn, no politician should step foot into Janguasi to campaign if our community is not connected to electricity by end of 2019”.

According to Mr Lampson Adams Lengwa, the Assemblyman for Janguasi Electoral Area, the community was captured under the Self-Help Electrification Project (SHEP) started in 2010.
He added that it was not included in the China Water Project which was aimed at extending electricity to rural communities that were not by the main or trunk roads, but the SHEP targeted communities that were by main roads.
“The CWP was meant to extend electricity to interior communities but not villages by main roads,” he stressed.
He said the local contractor (“Book Electricals”) that was working on the Self-Help Electrification Project, abandoned the work because, according to him, he was not having funds to continue.
The Assemblyman said he made several follow-ups to the Nadowli-Kaleo District Assembly whose officials always assured him the contractor would be compelled to return to site as soon as possible but still he was not back.

He added that efforts for Member of Parliament for Nadowli-Kaleo Constituency, Mr Kingsford Sumana Alban Bagbin, to get the contractor back to site has also proved futile.
Meanwhile, Madam Katherine T. Lankono, the District Chief Executive, has urged residents to remain calm as the Assembly worked to resolve the matter.
“The Chiefs and the Assemblyman is aware we have a difficult contractor and the consultant is trying to get him to do the finishing touches for electrifying the community,” she added.