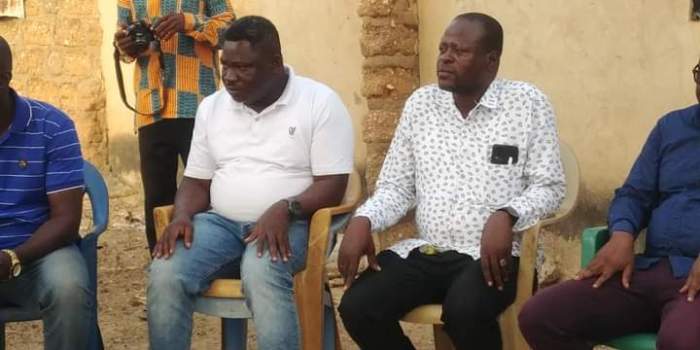 MP for Sissala East with MCE at Gwosi

The Member of Parliament for the Sissala East Constituency, Hon. Issahaku Amidu China has on December 5, 2021 handed over sites to construct 1 borehole each at Nanchala and Gwosi Upper communities.

The MP who doubles as the deputy minister of sanitation and water resources has said this was part of his commitment to redeem his promises he had made to the people, which were some critical needs the people tabled before him during the 2020 electioneering period.

“I wish to thank you once again for electing me as your MP and Akufo Addo as your President. During my campaign in 2020 I came here and you told me, among other things, you needed classrooms for your basic school and more importantly a borehole because you’re facing problems accessing potable water, and I, on that promised you that I will drill a borehole for you if you elect me as MP. So, today I have come back to fulfill that promise”, he said

Addressing short durbars in the communities, the Municipal Chief Executive, Hon. Fuseini Yakubu Batong has said “funds are readily available to execute the projects”, and has tasked the contractor awarded the two projects, Tahit Enterprise to complete drilling the boreholes within 6 months period.

Hon. Fuseini Yakubu Batong has also urged the community members to give the contractor and his team maximum support and cooperation needed to execute the projects.

The Chief of Nanchala, Kuoro Champua Baka while expressing his happiness has entreated the MP to come back and fulfill the school pledge as well.

Also, the Chief and elders of Gwosi Upper have commended the MP for the project. They have also acknowledged efforts he made as the then deputy Upper West regional minister to extend electricity to the area.

The elders have entreated him to continue to work for his people and should not allow “certain people” to distract him.

Meanwhile, the women from Gwosi Upper have thanked him profusely, adding that the intervention is going to benefit them the most, noting several troubles they had to go through daily to access potable water to run domestic chores.