SINCE the uncontrolled logging of rosewood for export mostly to China began in the Upper West Region of Ghana some three years ago, the impact is being felt in the mostly farming communities. Communities have started reporting erratic rainfall patterns, storms, poor harvests and bushfires.

“Here we don’t have the rules that govern concessions, where one can only harvest wood from allocated concessions like in other parts of Ghana where timber is harvested. In this area, people harvest whatever, and wherever they can find rosewood,” says Michael Asante a small-scale timber harvester operating in the Upper West Region of Ghana.
He adds, “Here, while the local people don’t know the value of the rosewood, no company operating in the area has permit to cut down trees; they only have permits to collect.”
There is currently a ban on felling rosewood trees in the region, but there is evidence the law is being violated – fresh trees are being cut, and not many offenders are facing the law.
Asante who says he has been in the timber business for more than 10 years, believes that at the current rate of harvesting, rosewood will be gone from the region in three years, and he has a plan ‘B’. “I will move to other tree species or go into stone quarry,” he beams. 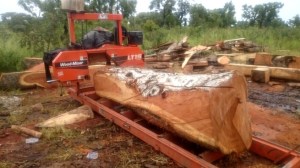 The Upper West region is the poorest in Ghana, and has very little to show for feeding China’s insatiable desire for rosewood. Rosewood exports from Ghana didn’t start until 2005, and exports have surged since then, largely driven by demand from India and China, and the Upper West Region is contributing some of its rosewood.
According to the Ghana Living Standards Survey Round 6, the incidence of poverty and poverty gap are not evenly distributed in the country’s administrative regions. The Greater Accra has a very low level (5.6 per cent) of poverty incidence, which is 18.6 percentage points lower than the national rate of poverty. The three northern regions, which comprise mainly savannah areas have very different levels of poverty incidence.
“More than four in every ten persons are poor in Upper East (44.4 per cent), increasing to one in every two in the Northern region (50.4 per cent) and seven out of every ten in Upper West (70.7 per cent),” it says.
Rosewood harvested from Tumu and surrounding communities
Documents obtained by ghanabusinessnews.com, shows that between February and April 2018, 12 companies using a total of 173 trucks have collected 5.4 million square meters of rosewood, earning the state stumpage revenue of GH¢649,200. While this shows official government revenue from rosewood harvesting, ghanabusinessnews.com obtained receipts showing that local traditional authorities and youth organisations earn revenue from the loggers. They charge fees to allow the loggers to move the harvested woods to Ghana’s port of Tema. Inquiries from the Regional Coordinating Council however indicated that the practice by the local authorities is unlawful.
The receipts from youth organisations and traditional authorities, serve as a licence to move illegally felled wood out of the region to the ports for export.
Officials look the other way
The huge revenue derived from the trade by the state seems to account for the lukewarm attitude of public officials in enforcing the ban on rosewood harvesting which is still in force in the Upper West Region.
While action has been taken in some instances, there is a general lack of enthusiasm in curbing illegal logging of rosewood. Court documents obtained by ghanabusinessnews.com shows that five persons engaged in illegal logging were arrested and arraigned before court. They all pleaded guilty and were sentenced to various fines by the Tumu District Magistrate Court as at November 2018.
Moses Luri, the Executive Director of the CSO, Social Initiative for Literacy and Development Programme (SILDEP) believes that the Forestry Commission knows there are no woods lying in the forests to be salvaged and yet it continues to issue permits to companies to salvage them.
Luri argues that government is motivated by the revenue from the rosewood business to look the other way.
He, however, suggests that the government should promote rosewood seed and treat the resource just as it treats cocoa.
Officials of the Regional Coordinating Council who say they were not authorized to speak on the matter and therefore wouldn’t go on the record, confirmed that the loggers come to the area with permits from the Forestry Commission Head Office in the country’s capital, Accra, claiming they are authorized to collect, but they end up cutting and “there is little we can do,” the officials said.
When ghanabusinessnews.com reached out to the CEO of the Forestry Commission, Mr. Owusu Afriyie, also known as ‘Sir John’ in political cycles by phone and text messages, he did not respond to a request to hear their side of the story.
“These areas are the food basket of the region, because they have some improved vegetation. These are the areas with some tree cover – rosewood. But now the rosewood is being completely cut, and they are even moving to other tree species including one known as pauper,” says Issifu Kanton.
Even though Kanton, says advocacy has been going on, he thinks the lack of political will has slowed down acts to stop the indiscriminate felling of the rosewood.
Invasion of forest reserves
During long treks through farms, we discovered freshly cut rosewood waiting to be moved, and stumps of freshly cut wood. Some can’t be exported or used because they are not matured and others have hollows – timber companies leave them rotting on operation sites. Local people are allowed to collect some to produce charcoal.
The Tapania Forest Reserve near Tumu hasn’t been spared. Despite a sign saying Tapania Forest Reserve, loggers have invaded the forest and cut as many matured rosewood trees in sight. In the middle of the reserve are scattered rosewood stumps.
CITES and other measures
Senegal and Nigeria, in responses to the indiscriminate felling and export of rosewood in these countries have worked to get rosewood included in CITES. Nigeria, for instance, through CITES has suspended trade in rosewood.
Ghanaian authorities have said a number of times that as a medium-term measure to control further harvesting of rosewood, arrangements were being made in collaboration with CITES and civil society organisations to introduce a quota system that will regulate how much rosewood was exploited at a given time.
Authorities also say a policy on Tree Tenure and Benefit-sharing for trees outside the forest was being discussed to motivate farmers to resist the illegal exploitation of rosewood and other tree resources on their farms and to stop speculative felling by illegal loggers.
While authorities tinker around for a pragmatic response, it appears the harvesting of rosewood, especially in the fragile ecological zones of the Upper West will continue.

This investigation by ghanabusinessnews.com was funded by Ford Foundation and the International Centre for Investigative Reporting, ICIR.