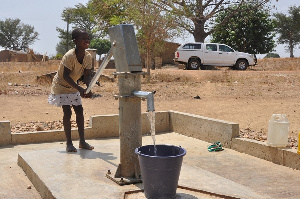 Government has activated a procurement process for the award of contracts towards drilling 250 boreholes with funding from World Bank to improve water and sanitation situation in the Upper West Region.

Dr Hafiz Bin-Salih, the Upper West Regional Minister, made this known during the first ordinary meeting of the Upper West Regional Coordinating Council (RCC) for year 2019 in Wa.
Municipal and District Chief Executives (MDCEs) and Heads of Departments of government agencies patronised the meeting, but Dr Bin-Salih was attending it for the first time since assuming office as the regional minister after his predecessor was axed.

He said the elaborate borehole project had been rolled out to provide potable water to vast majority of the people, particularly those in rural communities, lacking water.

He said under the Ministry of Special Development Initiative, 69 Solar-powered limited mechanized boreholes and 69 10-seater Water Closet Institutional Toilets were under construction in various communities across the 11 constituencies.

On sanitation, he said, Multiple Indicator Cluster Survey by UNICEF in the region recorded 11 percent on basic sanitation as at 2011. However, he said due to some interventions that took place, the percentage climbed to 15 percent by the close of 2018.
The Community-Led Total Sanitation programme being embarked upon by UNICEF and other Organizations and NGOs recorded 55.61 percent Open Defecation Free (ODF) status at the end of 2018 with Nandom as the only district with 100 percent ODF status.
“I want to urge the remaining districts in this Region to learn from Nandom by working hard towards attaining ODF status within the shortest possible time,” Dr Bin-Salih said.
The Upper West Region’s performance in terms of sanitation has improved considerably as it recorded 121 ODFs since January this year as against 97 in 2018.
Meanwhile, the RCC has fixed June 3 for the launching of the regional ODF league table for 2019, aimed at fostering health competition among Municipal and District Assemblies.