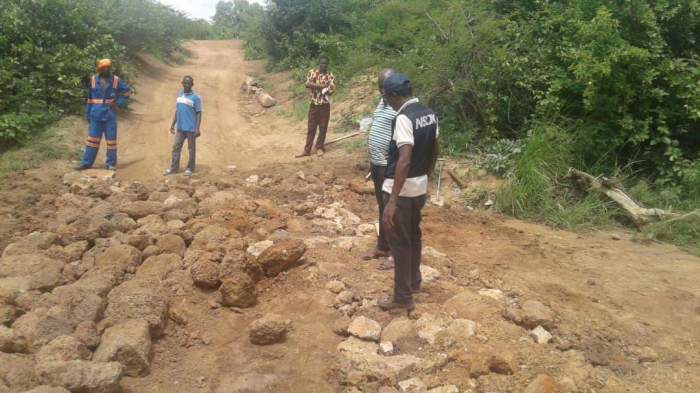 The State of Sissala West Roads

Several passengers and farmers travelling through Gwollu on the Jeffisi road have been left stranded in Kunkorgu, five kilometres from the Sissala West District,
Gwollu, after portions of it curved in and was swept away by floods.
Sissala West District Assembly Engineers
blame the situation on misplaced culvert which was supposed to protect a major
stream from running over the road.
Transportation has been disrupted since last
Sunday as vehicles from both directions, Gwollu and Wa, have either been forced
to cancel their journey or stop at Kunkorgu to exchange passengers.
Gwollu is the home town of former president
Dr Hilla Liman but there are no tarred roads in the area, posing a grave
challenge to social and economic activities.
The Ghana News Agency visited the collapsed
road and saw many people from Kunkorgu filling the trench and redirecting
running water through a culvert.
The people carried stones to fill the ditch
and used bags of sand to fortify and prevent water from flowing over.
Mr Mohammed Haruna, the New Patriotic Party
Chairman of Kunkorgu, told the GNA that: “Coming out to do this exercise, we
put aside partisan politics, we are looking at collective interest”.
The road serves commuters from Tumu through
Buoti to Kunkorgu and proceeds to Nyimati Bullu Paana all the way to Burkina
Faso.
The chairman described it as a major road
and appealed to stakeholders to help fix it.
Mr Luqman Venue, Youth Organizer of the
National Democratic Congress of Kunkorgu, added: “I don’t have much to say, my
only appeal is that, authorities should look at our efforts in restoring this
road and kindly offer their help”.
Mr Mohammed Bakor, the Sissala West District
Chief Executive, visited the area and was seen interacting with the contractor,
Speed.
He assured the public and travelers that
efforts were being made to ensure passengers and vehicles used the road
shortly.
The Kunkorgu Nyimati road is a community
labour construction of feeder road under Ghana Social Opportunities Project,
according to the Sissala West District Assembly.
The stranded commuters and farmers called on
government to bring the contractor back to site to complete the Kunkorgu to
Nyimati road.
Elders of the community led by Mr Mumuni
Paale, commended the gallant youth for their communal spirit to help fix the
broken road.