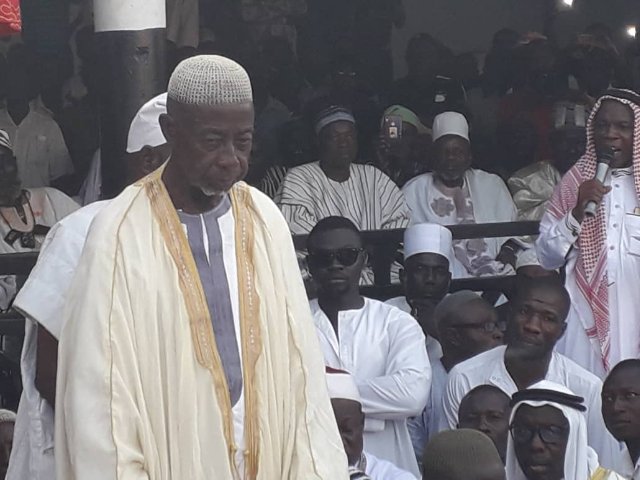 Imam Alhaji Osman Mahama Kanihi, the Upper West Regional Chief Imam, has stated that Islam does not condone child marriage but instead places emphasis on the proper training and development of the child before marriage.
He noted, however, that the practice of a man tying a girl’s leg at birth as his future wife has
been misconstrued by some members of the religion to mean that Islam condoned child marriage.
Imam Alhaji Kanihi who stated this in an exclusive interview with the Ghana News Agency in Wa,
pointed out clearly that the practice was still in effect today but stressed
that the man only shares bed with such a girl when she attained the age of
maturity as was in the case of Prophet Mohammed and Ayisha.
He emphasized that
even such a girl had the right to refuse to marry the man when she becomes of
age, stressing that it was not compulsory for the girl to still go ahead to
marry the man if she did not like him.
He noted that even
though in Islam a girl was said to have attained maturity after experiencing
her first menstrual cycle, the 1992 Constitution of Ghana pegged the age of
maturity at 18 years and above and that was equally binding on all Muslims in
the country.
The Regional Chief
Imam said Islam placed priority on the training of the girl child which
includes her education, health and development, adding that if parents followed
this strictly, the 18 years set by the Constitution would even be too early for
them to have finished training their girl. “When you give out a
child for marriage, you destroy her life; she becomes frail, shy and cannot do
anything to help herself and the family, thereby becoming a liability instead
of an asset,” he emphasized. Imam Alhaji Kanihi
noted that more women were now becoming bread winners of their families and
child marriage should not be allowed to destroy the future of these girls.
“There is pride in
giving out a properly trained, well-educated and developed girl for marriage
and all parents must not miss this opportunity of celebrating this pride,” he
said.
Earlier, a group of
Imams in the Wa Municipality participated in a day’s training programme organized by Jamia-Al-Hidayat-Islamic Group under the sponsorship of Plan International Ghana and the Social Initiative for Literacy and Development Programme (SILDEP).
The training programme dubbed “Trainer of Trainees: Advocacy on Early Child Marriage and
Domestic Violence” was a platform for the group of Islamic scholars referred to
as “Champions of Change” to share perspectives of Islam regarding child
marriage and also to learn the constitutional provision on same issue.
Madam Anna Nabere,
the Girls Advocacy Alliance (GAA) Project Manager for Plan International Ghana,
said these “Champions of Change” were being trained to understand the position
of the Constitution, which was the supreme law of Ghana, so that they could go
back to correct some of the misinterpretations and misapplications of the Quran
by some Muslims on the issue of child marriage.
She said GAA had chalked some successes, pointing out that before 2016, child marriage was 21
percent in Ghana and 25 percent in the Upper West Region, but had now reduced to about 19 percent and 22 percent respectively.
Madam Nabere noted that they were hoping for a Zero percent record of child marriage in all communities in the near future so that girls could enroll in school and complete their education with dignity and have the right to choose their own husband.
Mr Moses Dramani Luri, Executive Director of SILDEP in an interview, urged the Champions of Change to demonstrate high commitment to the fight against child marriage as
they have been empowered to do so.
He said it was only when there was equal opportunity for the girl child to develop her potential to
complement that of the male child that society could better develop.