The Gbenebisi basic school and the Tumu Midwifery Training College will soon get 3-unit classroom block each.

This is because the Sissala East Municipal Assembly has, yesterday, December 5, 2021 handed-over sites for the construction of the projects. 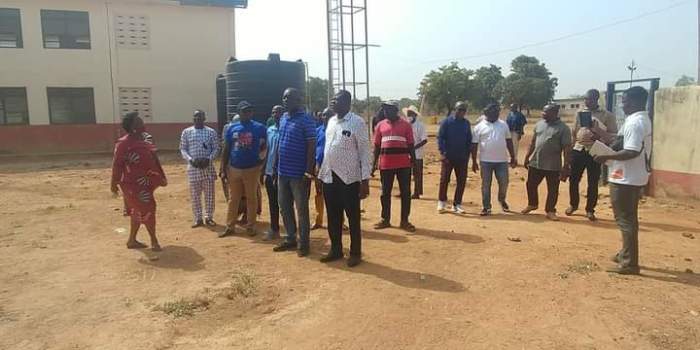 They are funded by the District Development Fund(DDF).

Speaking during a survey of the sites, the Municipal Chief Executive, Hon. Fuseini Yakubu Batong has tasked the contractors to complete the projects within a 6 month period to help reduce the infrastructure deficit the schools are being faced with.
“We are here today to hand-over a site to the contractor to build a 3-unit classroom block for the college. And I want to entreat the contractors to complete the tasks within a 6-month duration, because the population of the Midwifery College in particular is more than the infrastructure the school has”, he said.

Hon. Fuseini Yakubu Batong has entreated the schools to support and cooperate with the contractors when work commences.

The Principal of the the College, Madam Lardy Kanton has expressed her excitement and says ” this is reality that the much anticipated project is to begin now”.

She has also expressed her gratitude to the Member of Parliament, Hon. Issahaku Amidu Chinnia and the Municipal Assembly for the project.

Madam Lardy Kanton has said she together with her staff is ready to collaborate and support the contractor to execute the project.

Meanwhile, speaking at a short durba in Gbenebisi Hon. Issahaku Amidu Chinnia said he has come to redeem his pledge he had made to the people following a passionate appeal from them before the the 2020 general elections, that their school needed additional classrooms to replace classes under trees and sheds.

Also, he said last year, in December he drilled and handed-over to the community a borehole following appeals from the residents.

The MP has pledged the headteacher and his staff to provide them with a solar panel and television soon and that he would, in time be coming back to construct more classrooms for the school.

On behalf of the Municipal Education Directorate, the deputy municipal director in charge of Administration and Finance, Mr. Godfred Baveru Kanton extended his gratitude to the MP and Assembly for the intervention, stating that “our excitement cannot be quantified because we know in the next 6 months our children would not be battling with chasing sheds around, would be free from rain beating them and would be free from the hazardous wind and weather conditions they face daily, because we are going to have another set of 3-unit classroom here”.

He however appealed to the MP that 5 more additional classrooms are needed to eliminate classes under trees in the school.

He also commended the school for its good performances in the Basic Education Certificate Examination(BECE) annually despite coming from a challenging environment.

The Assembly member, Hon. Abass Tonduogu also thanked the MP for the interventions brought to his electoral area.

Gbenebisi basic school currently has only three classrooms, which has compelled about 8 classes; Kindergarten 1 to Primary 6 studying under trees and sheds.

The farming community is yet to be connected to the national grid.